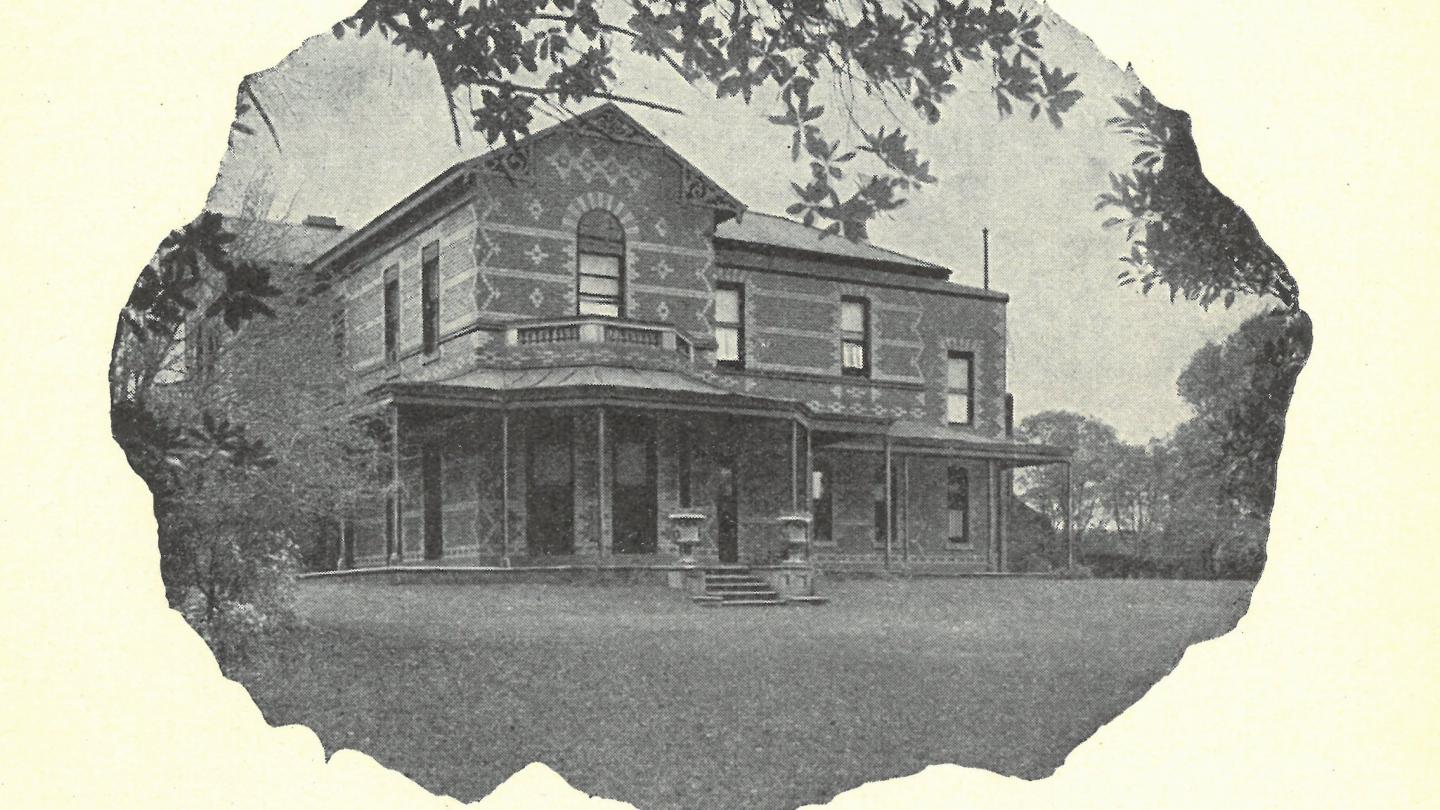 It was the move into Ruyton’s second premises in early 1882 that enabled founding Principal Charlotte Anderson to first welcome boarders into her young school. From modest beginnings in a room in Mrs Anderson’s rented home just four years earlier, Ruyton had quickly flourished. By April 1882, advertisements were appearing in the papers, noting that Ruyton had moved to a new, larger house and grounds at ‘Edgecomb’ in the Studley Park area of Kew, and that there were ‘VACANCIES for more BOARDERS’ among its’ many recommendations. For the next ninety years the Boarding House would be central to Ruyton, as girls came from far and wide to both live and learn at school. 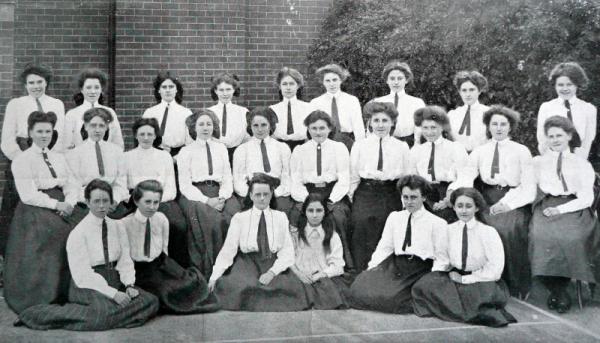 A well-respected and prominent headmistress, who was also resident onsite, was a key reason that many families chose to entrust their daughters to Ruyton. Until the 1960s, Ruyton’s owner-Principals like Charlotte Anderson and her successors always lived in private apartments within the same building as their boarding charges. Overseeing lessons by day, each Principal also supervised the goings-on of the Boarding House at all other times, usually with the support of a Matron and other live-in domestic staff. An intimate atmosphere, with boarders generally numbering below 35, was an additional attraction of Ruyton, ensuring that the Principal had a chance to get to know and oversee the development of each girl.

The Boarding House was necessarily a highly organised world, and a rather Spartan one by today’s standards. ‘We lead a life of bells and drills’ remembers one former boarder, (Pamela, 1972.)  ‘A bell woke us up first thing in the morning, a bell for breakfast, a bell for school… a bell for every aspect of the day.’ The rooms were cold, the few bathrooms were shared, and each girl had just a bed and a cupboard to call her own. At Henty House, where Ruyton was situated from 1920, the main dormitory for older girls was located on a semi-closed-in balcony. In keeping with the philosophy of ‘fresh-air’ sleeping of the time, canvas blinds were the key protection from the weather until about the mid 1940s, later replaced by louvre windows. Girls grew used to waking up to find a possum scampering around the dorm in the middle of the night. The bright-eyed visitors had usually been lured in by pieces of apple that had ‘accidentally’ been left out for them on the balcony railing. 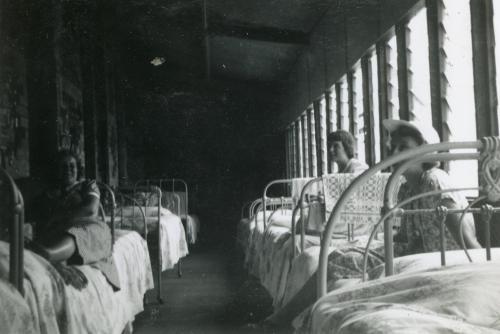 Alongside the regulations that helped the place run smoothly, were the Boarding House traditions that created a homely atmosphere and a shared spirit amongst the boarders. Hilda Daniell, Ruyton’s Principal 1913 – 1952, maintained a programme of regular boarder’s picnics, tennis parties and dances, as well as inventing a much loved annual ‘Ghost Night’. A skilled storyteller, Miss Daniell held the girls spellbound each year with a tale of a fictitious pair of Henty brothers whose argument had ended with the murder and burial of one brother under the towering Moreton Bay Fig beside what had once been his family home. Every November 11, the ‘ghost’ would return to Ruyton, and with the help of Miss Daniell’s hidden accomplice, would rattle his chains and moan loudly and eerily from the 11th step of the stairs at 11pm – causing the girls to squeal and grip each other in excited terror. 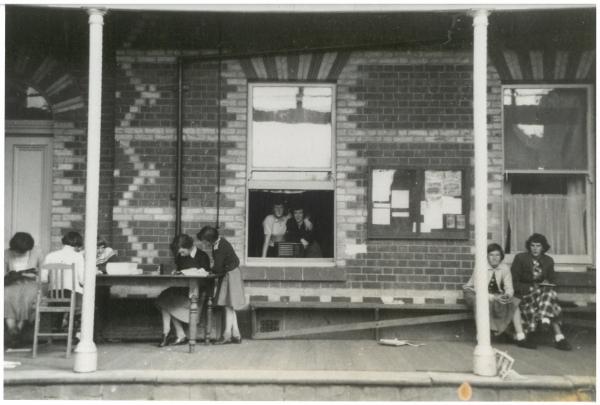 The sheltered north veranda was a favoured spot for homework and letter writing, 1950. (Ruyton Heritage Collection)

A judicious use of ‘turning a blind eye’ by staff also gave the boarders plenty of fun and camaraderie that was necessary to combat any homesickness. ‘Of course, there were midnight feasts. I’m sure Miss Daniell and the Matron had some laughs at how silly we were’ one former boarder has recalled, (Janet, 1951). Being dared to venture on to the roof, sneak down to the kitchens for unsanctioned snacks or leap across the old fishpond beside Henty House are some of the other remembered escapades. When writing of the Boarding House’s closure in 1971, Margaret McRae, (Principal 1963-1985,) noted ‘I think perhaps what the boarders will remember most is the companionship, the fun, the music and the laughter, and perhaps most of all, the talking….  I shall always remember the talking! Sometimes I wonder how girls who have seen each other all day, every day, can find so much to talk about, … but they never seem to stop!’ 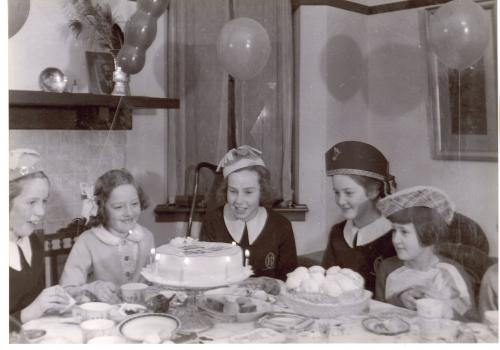 Miss McRae, and the School Council, made the difficult decision to close the Boarding House at the end of 1971 in the midst of a changing social and educational landscape which decreased demand for places. New High Schools were opening in regional Victoria and its neighbouring States, enabling more girls to access education in their own communities rather than in Melbourne. The economics of running a small boarding house (for many years the smallest boarding house in Victoria,) became untenable, and live-in staff were more and more difficult to find. Miss McRae summarised these factors for ‘The Ruytonian’ in 1971, noting that the Boarding House had been an important part of the School for 90 years and the decision to close it was necessary, but made with sadness.  Using the words of a Ruytonian from 1919 who had been reflecting on the school’s impending move to the Selbourne Road site, Margaret McRae quoted ‘…it is always with feelings of regret that we see tradition being swept aside in the interest of modern demands.’ 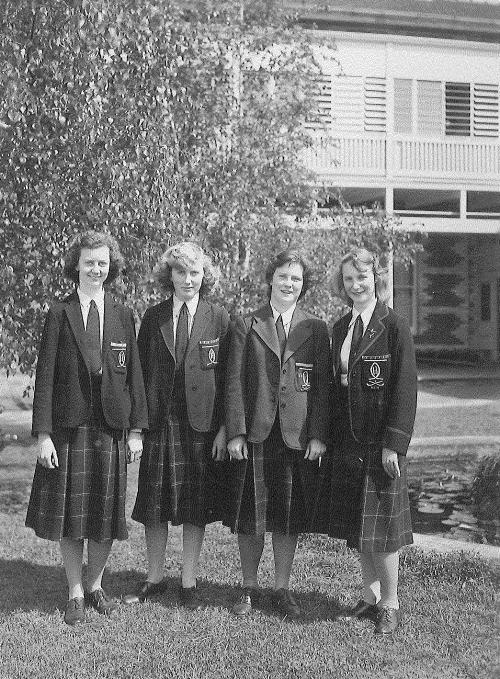 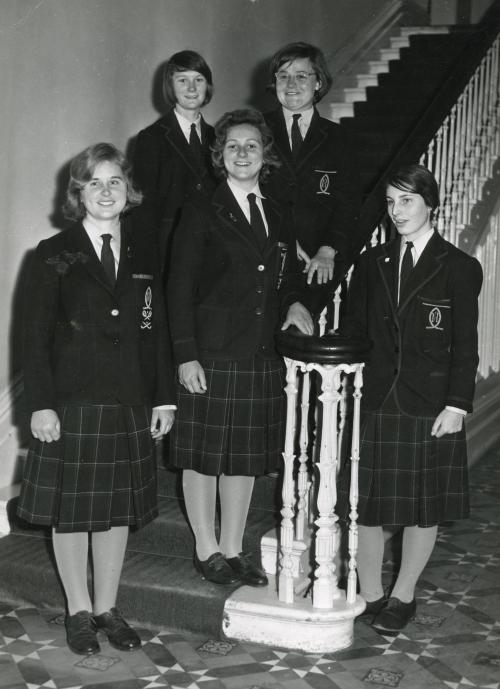 The Boarding House prefects and probationers of 1961 pose on the stairs of Henty House. (Ruyton Heritage Collection)